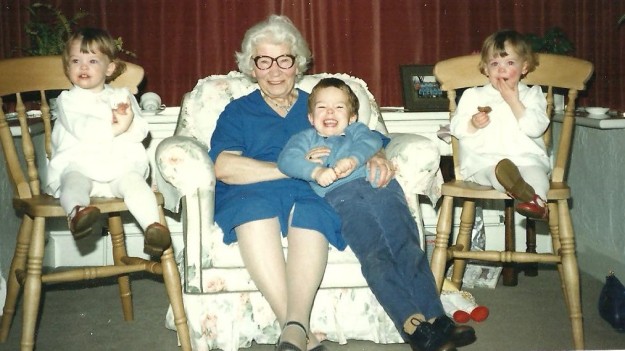 Family memories: Who are you leaving a legacy for? (That isn’t me, incidentally, its my own Grandma, and my nephew and two nieces, all grown up now.)

I became a Great Auntie for the third time yesterday.  Actually, saying that makes me sound old, and I’m not, really I’m not.  I became an aunt for the first time when I was 14, and since then my siblings have surrounded me with a reasonably sized and very rewarding family.  A big family event like this, or even just a friend having a baby, always raises a question for me, since I don’t have children of my own.

When I am gone, who will remember I was here?

I think that is one of the reasons I have stuck so dilligently to the diary-keeping habit.  The need to leave a mark,  To leave something of myself for posterity.  My diary is a record of my brain as much as anything, its change and development;  the ideas and interests I have had; the things I believe in; the problems i have struggled with and the solutions I have found.  And yes, it records my loves and losses too.

Every time I write, there is a part of me, something in the back of my mind, that is aware that one day, some beloved relative will find these notebooks and start to read them.  I don’t censor myself because of that.  Far from it, because I want them to know, fifty years down the line, who I really was, and what my daily struggles and joys actually were.

Some women keep a diary throughout their pregnancies, talking to their unborn child through the pages.  Others record their terminal illnesses so as to leave a message for their children to remember them by in later years.

Writing a diary can also be a more direct conversation with another person.  Anne Frank wrote her famous diary to her imaginary friend Kitty, perhaps so that she would not feel so alone in her wretched circumstances.  I doubt she ever thought she was leaving a legacy that would inspire people all over the world for decades to come.  For Frank, Kitty was a friend and confidante, a person to whom she could confide things she would never be able to say to anyone else.

For the most part, people write diaries and journals for and to themselves.  They may have little thought of recording ‘interesting times’, unless they are self-seeking politicians such as Alan Clark.  They write because they need to, because it helps them work things out, or simply because they enjoy it.

None of these reasons is wrong.  There are no wrong reasons.  You might think it self-important to want to leave a mark on the world, but it doesn’t make it a reprehensible motivation.   We all have our motivations for doing what may seem an apparently narcissistic activity, at least on the surface.

Take out your journal and spend a few pages musing on why you write it, and whether you write to or for someone.  Journals are not meant to be read by anyone except their writer, at least not without permission, but sometimes we write with someone specific in mind.  Do you write for someone else, to someone else, or just to yourself?  Do you mean to use your writing as a prompt for other forms of creativity, painting for instance?  Or do you want to record a difficult stage in your life so that you can learn from it?  Do you want to write things down so you will remember them in years to come, or do you want to leave a record for posterity and your great-grandchildren?

If you have something to say to a specific person that you cannot say to their face, write them a letter in your diary, letting it all out.  You never have to send it, but it can help to say those things in some private, safe way.  That is what your diary is for.

If you are interested in historical diaries, you might look at The Great Diary Project for inspiration.  Other people’s published diaries can be an endless source of inspiration, and I will be writing about notable ones in future posts.  In the meantime, why not pop out to your local library or bookshop and see what you can pick up.

RTBC after the storm #reallife #nofilter #reasonstobecheerful
RTBC Had a busy writing afternoon playing with a new idea. Its all rubbish, but sometimes you've got to scribble lots of rubbish to get to the good stuff underneath. #reallife #writing #reasonstobecheerful
RTBC Ladies and gentlemen, I offer you the rotring isograph, for my money, the best drawing pen in the world. I treated myself to a new one so I could get back to drawing during the lockdown. My old one only lasted me 36 years, so I figured it didn't owe me anything! #reallife #isographpen @rotringofficial #drawing #reasonstobecheerful
I am a white woman living in one of the whitest cities in the UK, and I don't know how to do the black square for #blackouttuesday . I have a lot to learn in so many ways. I'm doing the best I can right now. When I know better, I will do better. In the meantime, I know this much: this world is deeply, unfathomably racist, and my white privilege makes me part of that racism. I reject all forms of racism. I am sickened by the murder of black men by white police. I am sickened by the horror of Covid 19 unfairly decimating the black and Asian populations in the UK. I don't know what else to say. #antiracism