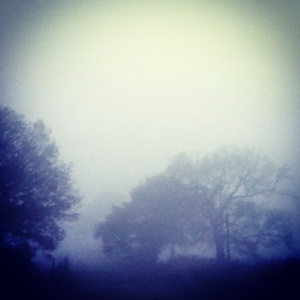 The view from my bedroom window.

Samhain is past, and we are well into the Mourning Moon, a time of releasing the old, and accepting our own power. Here in rural South Norfolk, we’ve had soggy and unseasonably mild weather, which has lately meant long days of grey skies and continual downpours. The last of the trees to shed their leaves, the oaks, have begun their brown weeping. The landscape is smudged khaki and brown and yellow, the edges blurred by autumn mists.
A fortnight has passed since my last post, a space during which I have been trying to recover a little of my strength, and some of my thinking capacity. The first week was one of complete surrender. After it, I felt more rested than I had in a whole year, I think.
The second was more tense, punctuated by a day-long dash to Oxford and back, to take the elders to the doctors for important assessment and treatment. Seven hours in a car, split in half by four hours of pushing a wheelchair and repeating myself every ten minutes, was enough to exhaust almost all the good will my body and I had built up between us. Since then I have been lost in a hormonal, anxiety-ridden mist, feeling OUGHTS and SHOULDS mounting up like an impending avalanche over my head. Add to that the impending doom of the Christmas season, and life-changing news from several friends, and I’m not sure I’ve come out of this much recharged.
Let’s just say, this has been a time of reassessment and reflection.
While I have come a long way in my year of ‘DARE’, I’m not sure that I can face another action word year. After ‘REVOLUTIONARY’ (2013) and ‘DARE’ (2014), I’ve attracted way too much change into my life for comfort, and I think I need a rest, thank you, Mrs Universe. I’ve decided that next year, I need a gentler world to ease my way. ‘BALANCE’ or ‘NURTURE’, perhaps. Or even just ‘EASE’. A reminder to be kinder with myself, something that, like most women, I find difficult to allow myself to do.
Tectonic shifts are happening in my creative life too. The relief I felt at giving myself a rest from blogging caused a delicious upsurge in other creative outlets. I immediately went off and made the back door curtain I’d been meaning to sew for the last six years. I’ve been hand-quilting a Christmas stocking for my guide-daughter too, which is enormously satisfying. I hope I manage to get it finished in time. Being able to sew again feels fantastic, although I had a few scary moments trying to remember how to thread my sewing machine!
I’ve decided I need to be using my journaling practise in a much more systematic way, too. I want to try a lot more guided journaling, by which I mean journaling from prompts rather than the simple stream-of-consciousness method I have always used. I’m feeling the need for more deep self-exploration, and I want to use my creativity as an integral part of the work I do with my Gestalt counsellor on a weekly basis to effect this.
I haven’t stopped writing, in the meantime, even though I haven’t been blogging. I’ve got two big fanfics on the go at the moment, great sprawling things that seem to be growing every time I look at them. My head is full of scenes stored up to be written out. That’s not a brilliant way of writing, especially when my head is so blurry. The other day, I sat down to write a scene, only to realise that of the two emotional points I wanted the characters to thrash out, I could only remember one.
A bit not good.
The result was some serious re-evaluation of my notebooking habits, which I still haven’t resolved, but hope to share with you soon.
As well as putting some conscious intention into my reading habits, I’ve been contemplating a new original writing project too. In the wake of the In/Famous Engagement, and the storm that followed it, I came to the conclusion that I needed to get away from fanfiction. And yes, I know I’ve been saying this for ages, but sometimes it takes a big event to push us to make real changes. So much is shifting in my life right now, and I want to move on to something fresh. I don’t think I’m going to be able to give up writing fanfics, nor do I honestly want to, but there is an idea knocking at my door, scratching at the wood like the ghost of Cathy in ‘Wuthering Heights’, and it won’t go away. As I used to say to my school friends:

‘I think I’ve got a story coming on’.

And finally, I’ve got some ideas for non-fiction that I want to have a go at. I think the phrase is ‘watch this space’.
Thank you, dear readers, for sticking with me through this break, and throughout this bumpy year. While I know it is only going to get bumpier for a while, I’m grateful that you are with me, listening to my ramblings. It is good to know I’m not shouting into the unresponsive darkness.
Happy creating,
EF