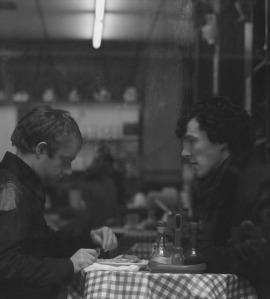 I’ve just published a new piece of fanfiction!  Its nice and fluffy and romantic.  You can read it here at fanfiction.net, or here at AO3.  And here is a little smattering to give you an appetite…

“It starts with breakfast in a café.  There is a table in the window.  There is a checked tablecloth, red and white gingham.  There is one of those plastic tomatoes that holds the ketchup.  There is sausage, egg, bacon and beans, and a tomato sliced in half and grilled.  There is cheap, stained cutlery and mugs of milky tea.  And there is happiness.

John cannot remember the last time he was this happy.  He thinks it may have been in Dartmoor.  So long ago.  Before the grief.  Before the loneliness.

And now here he is, three years later, and the man he missed, the man he mourned, is sitting opposite him.  And the most unlikely thing about it all is not that he is having a greasy breakfast with a dead man, but that Sherlock is tucking into the full English with extra toast.

‘Who are you and what have you done with Sherlock Holmes?’

And Sherlock actually laughs.  John has the distinct impression he has not done that for a very long time.”

1 thought on “New Fanfiction! Three Years is a Lot of Time to Think…”

I love these wise words on writing by Paul Magrs @pmagrs from his lovely book 'The Novel in You' #writing
Church of St Laurence, Ludlow, with an unexpected angel roof, which I thought were limited to East Anglia #church #ludlow #angels
Out and about. The Feathers Hotel (16th century) in Ludlow. #ludlow #reallife
Last night of the Christmas tree. 😥😥😥