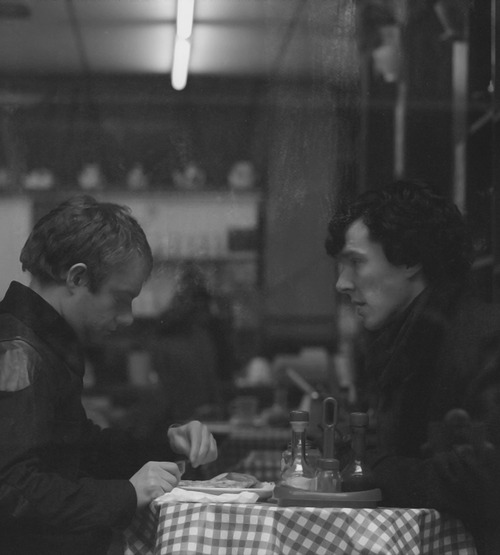 Once upon a time, I did a Diploma in Creative Writing at the University of East Anglia.  It was the first proper writing course I had ever taken.  One of the first things we were told as students was that in order to get better, we must write every day.

Writing for me has always been a very instinctive thing.  It comes in bursts. (I’ll talk about your creative rhythm in a future post.)  So I didn’t think much of this ‘show up at the page every day’ theory.  I believed that inspiration dropped from the sky and you did it, whatever it was, to manifest the story or the picture or the dance, or whatever your particular art form was.

Years later, in the midst of a story drought, the BBC TV series ‘Sherlock’ happened to me.  (I say ‘it happened to me’ because it was almost against my will that I eventually watched the reruns, having heard all the fuss people were making about how good it was the first time around.)  And what intrigued me about this version of the stories with which I was so familiar was not the modern setting, but the relationship between the two men, Sherlock Holmes and John Watson.

The idea had not occurred to me before with any characters I had created, or anyone else’s for that matter.  And possible scenarios started to blossom inside my skull.  In the end, there were so many of them that I had to write them down, just to make room for things like ‘remember to buy light bulbs’, and other such modern survival thoughts.

Before I knew it, I was writing something new every day.  Paragraphs became pages became short stories became novellas became books.  Every day.  Thousands of words.

This is a practise.  It is similar to an opera singer or concert pianist doing scales, an artist doing studio sketches, a ballerina doing barre work.  They say it takes 10,000 hours of practise to truly master a skill.

I have worked daily.

Yes, I have written fanfiction, which some literary writers sneer at.  But I have done my 10,000 hours and more.  Fanfiction has caused me to write daily.  Through it, I have learnt more about crafting stories than I could ever have done with my hit-and-miss, inspiration method.  I have learnt the lesson that my tutors on the Diploma sought to impress upon me, and failed.

To get good, you have to practise. Daily.

You have to try things out, stretch yourself, sometimes do the same exercises over and over again from different points of view and in different styles.  But you have to practise.

In my experience, yes, discipline has a lot to do with it.  You have to show up at the page, as they say.  You have to sit at your desk.  But it is important to have some motivation too, some enthusiasm that drives you.  I’m useless at self-discipline, believe me, and I wouldn’t have done it if I hadn’t had Benedict Cumberbatch and Martin Freeman circling each other like dogs on heat inside my skull.

Get the Habit of Art.  Get creative every day.

Get out your writers notebook. (You haven’t got one yet?  See my post about why you should.)  Think of a scene from a favourite movie that really grabs you, preferably with more than one character involved.  It might be a talky scene, something emotional, or some action.  Now put pen to paper and describe it from the point of view of one of the characters in the scene who is not the hero or heroine.  Someone periferal.  Or a secondary character.

For example, Star Trek’s Captain Kirk and Mr Spock are facing off about whether to transport to a dangerous planet when the transporter machine is on the blink and they might not be able to get out quickly, but you could write it from inside the head of the security man standing on the door, watching.  How does it feel to him to have the two men in charge of his future well-being fighting over something he maybe doesn’t understand?

You might choose to write Mary Bennett’s experience of her sister Elizabeth’s first meeting with Mr Darcy, from ‘Pride and Prejudice’, or housekeeper Mrs Fairfax’s dim view of Jane Eyre’s carrying on with Mr Rochester in ‘Jane Eyre’ (Jean Rhys wrote the entire novel ‘Wide Sargasso Sea’ in this way, from the point of view of Rochester’s wife, Bertha.)  Or you could write from the mind of one of James Bond’s jilted girlfriends!

(More on writing every day, and writing exercises soon.)

6 thoughts on “The Habit of Art, or How Benedict Cumberbatch Taught Me to Write”